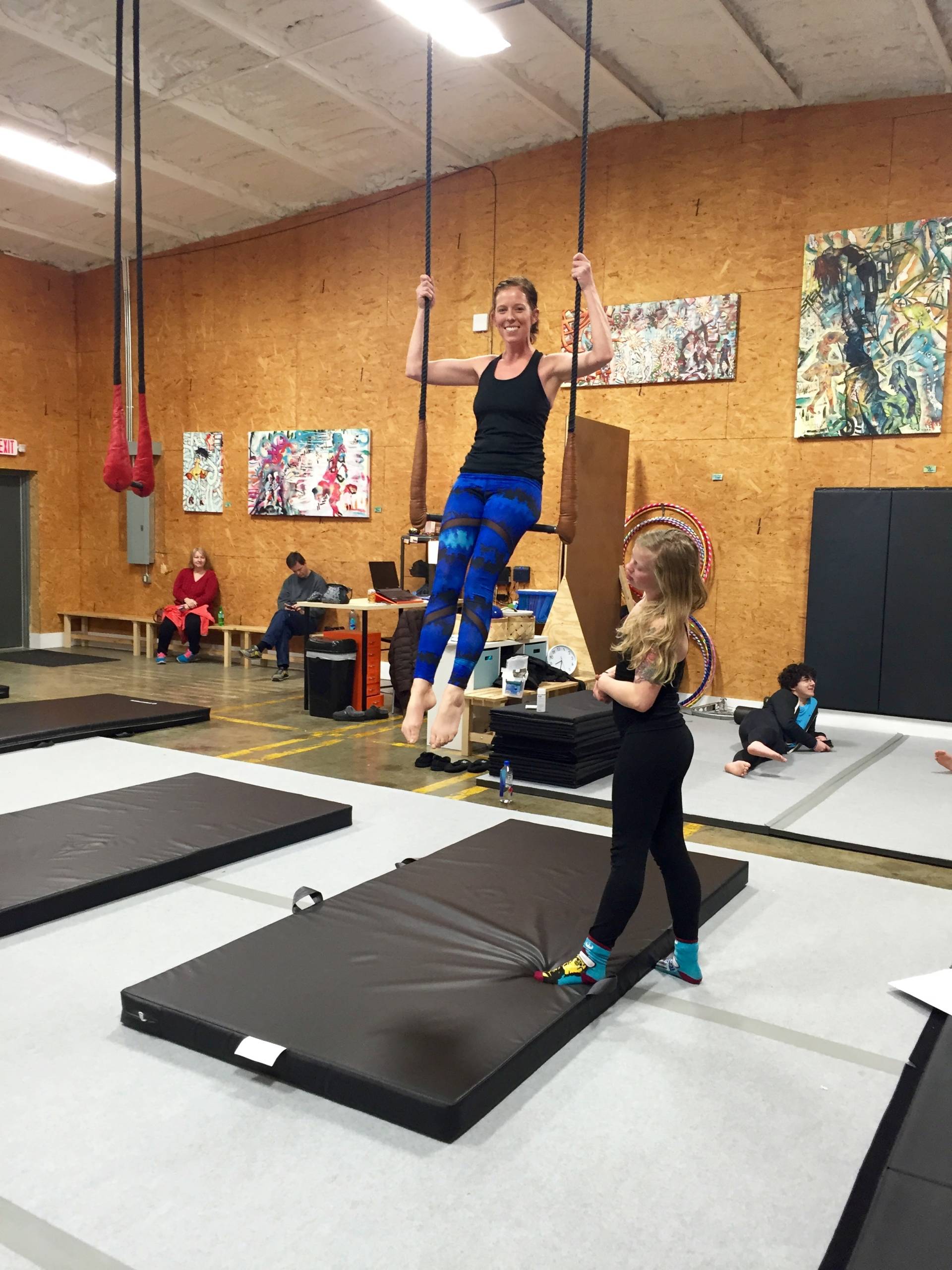 Course: Suspend Louisville is a cirque-inspired studio that offers a variety of aerial arts and cirque fitness classes. While no experience is necessary, Suspend Louisville requires a 4 part course of Introduction to Aerials where novices can learn the basics for strength, form, flexibility, and alignment. The Intro to Aerials class meets once a week for 4 weeks and you can start at any time.

sweat score: 2 out of 10 (however, I am sure the sweat factor increases as you gain experience)

wear: tights and a top

If you’re anything like me, the words “aerial fitness” have you conjuring up visions of yourself flying through the air and flipping around in brightly colored silques all with grace and a banging soundtrack. The dreamer in me always leaves the do-er part of me a little disappointed and humbled by those who can do.

I gave myself 30 minutes to drive from the East End down to NuLu where you will undoubtedly hit a closed street or construction site derailing your GPS. Due to an Apple Maps fail, I eventually called Suspend for more clear directions on how to navigate the NuLu area. Another 5 minutes later and I was finally pulling up to the warehouse Suspend calls home.

The studio is low in the frills department. If you are expecting a lobby or a “locker room” with anything more than a toilet and sink, then let me clear it up for you:

Courtney began our class by describing what we were seeing in the studio (silques, hoops, and trapezes), what we would be learning, and what we should not dare to attempt without a teacher’s supervision (basically anything you see on YouTube).

Finally, it was time to get our circus on. Courtney introduced each technique to us first and then one by one, we all got to take a stab at the aerial art.

While I had a momentary surges of adrenaline that may have resulted in brief bursts of perspiration, the lack of the sweat factor really seeped in for me.

We all discussed our higher expectations that the work out would leave muscles sore that we didn’t even know existed. However, as I watched the advanced students in the facility preparing for their winter show, I think they would beg to differ with our assessment.

Beginning to break a sweat but mostly from embarrassment…

Practically a pro now…
After three different silque exercises, we moved on to hoisting ourselves up on the trapeze bar.

This required a little more assistance from Courtney, but I felt a brief Britney Spears circa “Circus” moment nonetheless. It took all my restraint to not sing out: “I’m like the ring leader, I call the shots.”

Class wrapped up with a few stretches and then one final plea for Courtney to show us something on the silques. We were not disappointed as she flipped from the top to bottom as such rapid speed, I actually yelped

Suspend knows that most newbies are anxious to float through the air so they offer a 30 day package that includes the 4-class intro package (meets weekly), unlimited Cirque Fitness, unlimited yoga and meditation, and last but not least, unlimited Open Fly.

The first $25 drop in rate can be applied to the 30 day new student package rate of $120 if you choose to sign up after the fact.

It was exactly the class and atmosphere I needed to work out some internal fears and show myself who’s boss. I may drop-in again in the future for my second intro class, but overall, I need to put my money where the sweat is.

Laura Canfield had her first encounter with group fitness classes at age 16 when her mom dragged her to a 6 A.M. step aerobic class as punishment for skipping curfew. Whether it be a downward dog in a 100 degree room, a “tuck-tuck-hold” at the barre, or just good old fashioned run, she believes a good sweat each day keeps the crazy away. When she’s not wrangling toddlers or dreaming up DIY projects for her husband, she’s workin’ on her fitness. For more on those toddlers and DIY projects, follow her blog, OohLaLaura.com.