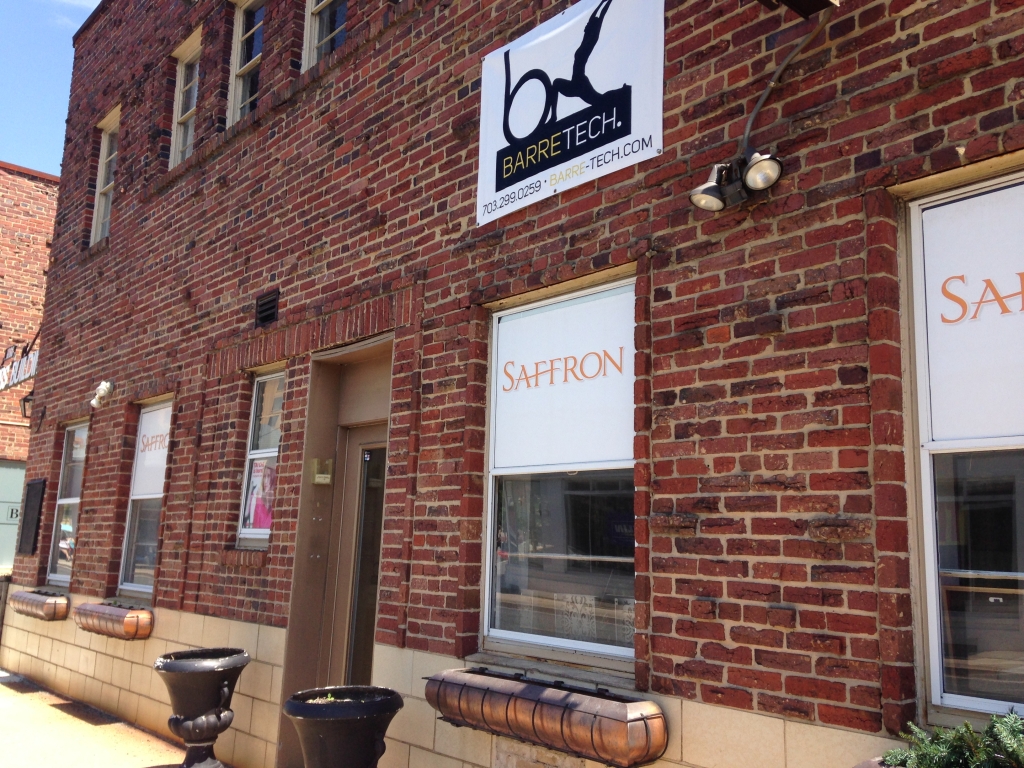 Crash Course: Barre Tech is a boutique barre studio brand born and bred right here in the DMV. It currently has two locations in Alexandria and Arlington, both with free parking and adjacent lounging areas. Barre Tech offers a number of different classes including prenatal, beginner, core, burn, yoga-barre, and more. The barre: 60 class is a full-body workout using small, isolated movements to target arms, abs, thighs, and gluteus. Barre Tech prides itself on being a stickler for proper form and technique (hence the name), so don’t think you’ll get away with those half-witted leg lifts. Every move is explained in detail, and teachers monitor and make recommendations and assists as needed. Click here for a full schedule of classes at both Barre Tech locations.

Barre Tech (formerly known as Barre Code) recently expanded beyond its flagship studio in Del Ray to a new location just steps from the metro in Clarendon. The building sits across the street from Northside Social and behind the Silver Diner on Wilson Boulevard. It’s the home of Saffron Dance studio and, if you’re a fan of barre workouts, you may have been there when Lava Barre occupied the second floor.  The entrance to Barre Tech is a little tricky to find, but if you go in the door pictured above, you’ll be in the right place.

The door will open into a small sun-drenched cafe that offers Goûter tonics, tea, bottled water, and a variety of tempting treats. The studio sits just behind the frosted glass, down the hallway on the left. There are cubbies along the wall for your belongings and a bathroom at the back. Pop through the heavy curtains, grab your equipment, and settle in at the barre.

The first thing I noticed about the studio itself is the gorgeous natural light pouring in from the windows. The crisp white trim along pale gray walls gives the room a fresh, clean feel. I grabbed a set of two pound weights (I now know better, less is more with those crazy barre arm series), a mat, and set everything up in the center of the room facing the mirror.

I forgot my sticky barre socks, so I had to make do with the pair I had on. Luckily they were my favorite, extra-cushy pair of running socks, so I didn’t mind. I did have to take them off for one of the exercises because I didn’t have enough traction, but other than that they did the trick. It was a good reminder that, while having the “right” gear is always nice, it’s not always necessary and shouldn’t keep you from giving it a go anyway!

The class was fun, challenging, and the sequences at times reminded me of Pure Barre. Which makes sense, since Amy mentioned she was trained by them. What makes Barre Tech different than any other studio I’ve been to (eight so far) is the instructor’s precise attention to technique and form. I’ll be honest, I’ve been to plenty of studios where I’ve stood at the barre, leg in the air, pulsing away and not having full confidence that I was really doing it right. Some of those ab exercises? Yeah, I think I’m doing those wrong too. It’s not a good feeling.

During this class, Amy came around and made very specific adjustments that helped me understand the movements and really get into the muscles that should be working. I had more than one “ah-ha!” moment where I realized what a particular exercise was supposed to feel like. I was really grateful to have a little extra help and impressed by how much more I got out of class with just a few small tweaks.

The playlist was fun and upbeat when it needed to be and calming when we did a stretching segment. The class seamlessly transitioned between mat work to barre work and back again, and Amy encouraged everyone to remember to hydrate throughout the class. It wasn’t particularly sweaty, but that doesn’t mean you shouldn’t be drinking water!

An additional thing to note about my class at Barre Tech: we did a number of different moves that I hadn’t tried at other studios. I loved this. I feel that barre can sometimes get a little mundane with the same lifts, tucks, and dips over and over again. As someone who really enjoys variety and mixing things up, it was refreshing to be at the barre trying new things with some expert guidance along the way.

Thank you to Amy and her team for hosting a fantastic, technique-filled barre crash.I loved trying out the unique Barre Tech approach and will need to make my way over to Del Ray at some point to visit the original location. Have you been?