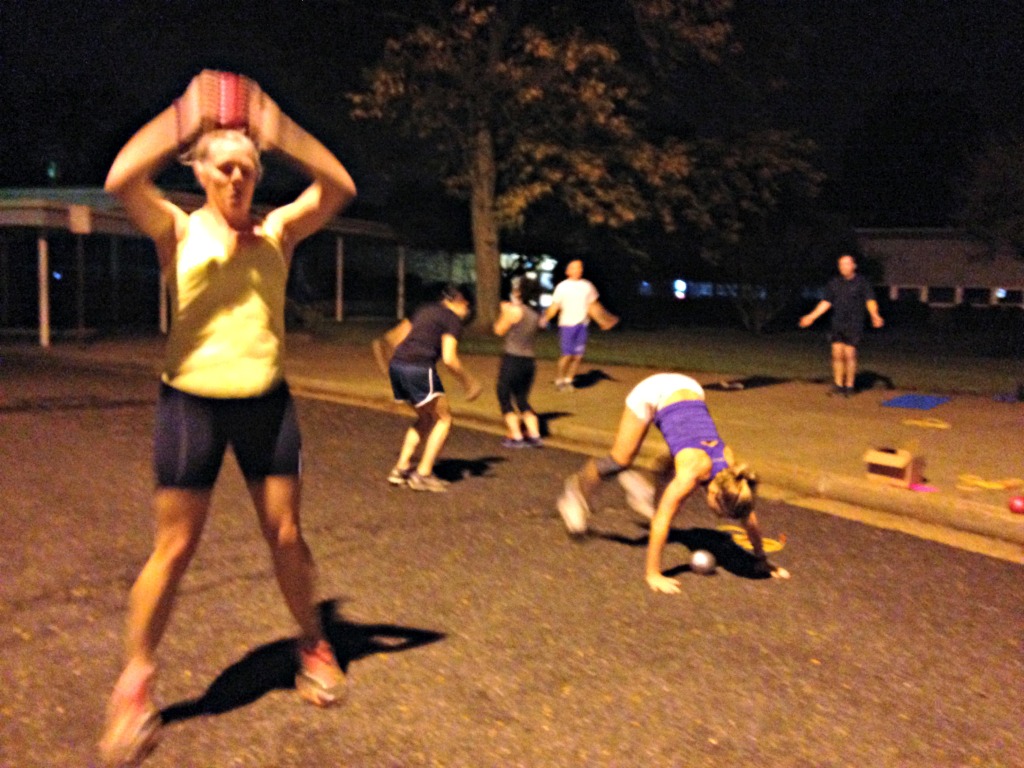 Crash Course: Body by Ginny is a year-round group outdoor bootcamp held at various schools and parks throughout Northern Virginia. Offering mostly morning classes, these fun and functional workouts will start your day off with lots of sweat, burning muscles, and a big smile!

[line] [left]where: eight schools and parks in Arlington and McLean

bring: a mat and weights (if you don’t have these, they supply a few extra)

Hey Fit Crashers! This is Chelsea coming at you again with my second fit crash – this time at the outdoor Arlington bootcamp, Body by Ginny!

These Body by Ginny classes (let’s call them BbG from here on out, mmmkay?) meet Monday – Saturday at local parks and schools in Arlington and McLean with classes from 5:45 am – 5:45 pm.Every location has a covered area in case it rains or snows.

I’m a morning workout junkie by nature, so I’m all over any fitness class offered at times before 6:15 am. If I can squeeze in my entire workout before 7:00 am, then my whole day is off to a better start.

That said, it can be difficult to find studios with classes that early in the morning (um…and even more difficult to photograph them. Sorry about that). Sometimes even if there is a morning class listed on the schedule, it will be too early or too late, and then I just wind up sleeping in instead. Fail.

This was one of the first things that attracted me to the BbG bootcamp – there are morning classes available from 5:35 – 10:00 am, allowing for plenty of flexibility in your schedule (note: there’s also one evening class at 5:45 – 6:45 pm, but the majority of classes are in the morning).

Every morning the bootcamps are taught in varying locations in Northern Virginia, and for this class I decided to join the founder Ginny for a 5:45 am class at Williamsburg Middle School in North Arlington.

I got there a few minutes late (I got confused about the parking – there are two lots and you have to park at the upper one near the school’s entrance) and by the time I arrived the class was already hard at work.

I received a warm welcome from Ginny and the class, and then I claimed a spot, rolled out my mat, and jumped into the workout! We started off with some strength moves including planks, mountain climbers, squats and upright rows.

I loved that Ginny did the workout right along with us – nothing irritates me more than a trainer who doesn’t practice what she preaches!

After our series of strength moves, Ginny divided us into teams and gave everyone a number one through five. Then she showed us our “workout of the day” of sorts, which involved completing five different exercises two times.

I was given the number four, so I started with jumping speed skaters and then worked my way through the rest of the list. We completed each exercise for one minute, and then jumped rope or ran a lap around the parking lot in between.

By the way, can we chat about jumping rope for just a second? Everyone in the class was a super speed demon with their rope, and I could not for the life of me figure out how to jump that fast without totally tripping over my rope and looking like a tool. What was I doing wrong? Did I not skip enough rope during third grade recess or something? Sigh.

After the cardio portion of the class was over, we did some ab work that burned in the best possible way, and then we completed a few partner exercises (partner pushups, planks, and leg raises). This was finished off with more jogging around the parking lot.

After the partner work, Ginny led us through a nice stretch, and then we called it a day. With all the equipment haphazardly strewn everywhere, it looked like a sporting goods store had exploded all over the sidewalk. Nice.

Overall the BbG bootcamp was much tougher than I was expecting, and I’m happy to report I worked up quite a sweat during the class. For some reason I was expecting this class to be made up of mostly soccer moms not in their fitness prime (not sure what led me to that conclusion – maybe the suburban locations?) but everyone in this class totally kicked ass! Seriously, there were some older people there who were kill-ing-it. I was so impressed!

Thank you so much for having me, Ginny!