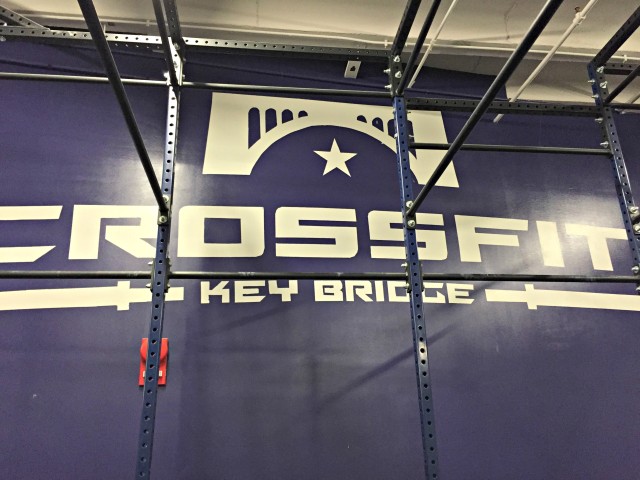 Crash Course: Located right along the Georgetown waterfront, CrossFit Key Bridge offers intense workouts that are sure to get your muscles burning and your heart pumping. This class is great for those who are in shape and familiar with the fitness scene. CrossFit knowledge is not required!

[/left][right]wear: what you’d wear to the gym

Here’s a quick warning for all you hard-core CrossFitters out there: I’m very new to your sport, and this post is probably going to sound like it was written by a total newb (um…that’s because it was). Even though I’m not all that familiar with CrossFit (I’ve taken one intro class before, which you can read about here), it’s always been something that’s intrigued me.

In fact, if CrossFit weren’t so expensive, I probably would have joined a box (that’s what it’s called, right?) long ago. Luckily for me, I’m a member of Classpass, and I’ve recently noticed a ton of new CrossFit boxes pop up on my Classpass account. Sweet!

Last week, I signed up for a class with CrossFit Key Bridge, and crossed my fingers that I wasn’t going to look like a total idiot among a bunch of hard-core CFers.

CrossFit Key Bridge is located – you guessed it – right next to Key Bridge. In fact, if you’ve ever been to Key Bridge boathouse, then you’ve probably passed right by this place without even knowing it.

The exterior of the building is very unassuming, but a sign on the door made it pretty easy to spot. Parking was very easy (and free!) at 6:00 am, but I bet if you went on a Saturday it would be next to impossible. Consider this your warning!

Upon arriving inside, I immediately saw two helpful signs showing me that the CrossFit box was located up some stairs and down a short hallway. It wasn’t the prettiest entryway I’d ever seen, but at least it was well marked!

The space itself was entirely no frills and exactly what I would expect of a CrossFit box: warehousey with high ceilings and lots of intimating equipment. Yikes!

As soon as I got there, I dropped off my gear in a cubby, and introduced myself to the coach to let him know that I was a total CrossFit beginner. Since I signed up for this class through Classpass, I was sort of expecting (hoping for?) and open introductory class, but after talking with the coach I realized this was the real deal.

Luckily Jordan was very nice and offered to explain any terms I wasn’t familiar with, and of course said he would help ensure I had good form, thus preventing an injury.

Before long the rest of the class arrived, and at 6:00 am on the dot it was time to get started! FYI – my class was very small with just two guys plus me, but it was also early on a Friday morning. My classmates assured me that the box is usually much more crowded, and this was a somewhat rare occurrence (methinks thirsty Thursday may have prevented additional attendees?).

Anyway! Our instructor got the music pumping, and then proceeded to explain our warm-up: 5 shoulder lifts (not sure what these were technically called; it was a drill to help with pull ups), 5 burpees, and one minute of double-unders (jump roping and getting the rope under your feet twice before you land).

This warm-up was pretty challenging, and definitely had me sweating and breathing hard from the get-go. Phew!

After the warm-up we played a little “pizza delivery” game. Say what? Yes. For this activity we were told to balance an incline ab mat on one hand (like a pizza) and try to knock the other person’s mat off with your other hand. It was really hard, and so much fun! I felt like we were in middle school gym class, in the best possible way.

After our game, we cooled down a bit with some stretching exercises, and then got down to the WOD (workout of the day).

On the agenda was four rounds of the following as fast as possible:

For the sprints, they had us running behind the building along the canal, which was really nice.

I found the WOD be tough but not impossible, and I finished in 19:55. Of course the guys finished way before me, but at least I finished! Those ring rows were hard!

After the WOD we all stretched and chatted a bit, and then my workout was done for the day. Phew! Such a great workout!

Although I came prepared to feel super intimidated by the class and all the CF lingo that came with it, I actually found Jordan and the other classmates to be very welcoming and willing to explain things to a total beginner.

It was a lot of fun, and I’m definitely planning to go back!

CrossFit Key Bridge is celebrating their one year anniversary (congrats guys!) and asked us to share these birthday deals with our readers. As always, call ahead to confirm.