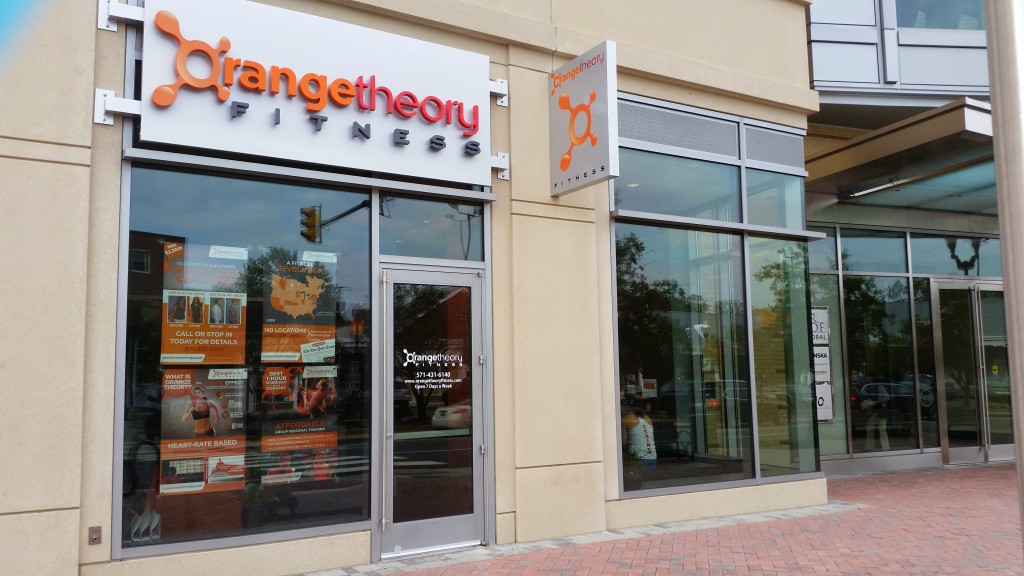 Crash Course: Orangetheory Fitness offers 60-minute classes divided into intervals of cardiovascular and strength training. Participants wear heart rate monitors that track their individual levels of exertion and display the results on screens around the studio. Check out the Orangetheory website for a full schedule of class times. [line] [left]where: 1776 Wilson Blvd | Rosslyn

Excited to share my very first crash! I didn’t have to go very far to find my first stop, as Orangetheory Fitness just recently opened up across the street from my apartment in Rosslyn. As soon as their signage went up, I was intrigued by this new addition to the neighborhood and anxious to check it out. Apparently, I wasn’t alone since it took awhile to find a class that wasn’t already booked solid. Luckily, I finally got in and made my way over to see what it’s all about.

It turns out that while Orangetheory is new to my neighborhood (& me!), it’s not new to the region. In fact, they have existing locations in Fairfax, Ashburn, and Gaithersburg. They’ll also be opening a studio in Ballston. The company started in Florida in 2010, and now has over 300 studios throughout North America. It seems they have quite the devoted following, and it was clear that many of my fellow classmates were already loyal regulars.

As I mentioned, getting into a class that was outside of work hours was not easy. They book up pretty far in advance, but I was finally able to snag a spot in a weekday morning class.

All of the classes are 60 minutes long and first-timers get their first class for free. To get the free class, you just fill out the form online or give them a call (which I recommend since they helped me find an available class much faster than I could on my own).

The Rosslyn location is located about halfway between the Rosslyn and Courthouse metro stations on Wilson Boulevard. Their bright orange signage is hard to miss and there’s generally street parking available nearby.

Speaking of the orange: there is a lot of it. I did not, in fact, put on orange filter on my photos to stick with the theme – that’s just the lighting inside the studio. Fortunately, orange happens to be one of my favorite colors (I even drive an orange car!) so I didn’t mind being bathed in it for my hour-long sweat session.

For rookies, get there at least 15 minutes before class to fill out the waiver, get your heart rate monitor setup, and meet with the instructor for a quick rundown. They have complimentary lockers on-site, as well as bathrooms and a shower. Once they set up your heart rate monitor, you strap is around your chest and wait for the signal to move into the studio. A staff member scans your monitor as you walk in, which activates the monitor to begin tracking your workout.

The class splits into two groups. One group hits the treadmill first, while the others start on the rowing machines. I made a beeline for the treadmills, since it seemed wise to start in familiar territory. For 30 minutes, I jogged at varying degrees of speed and inclines intended to represent my “base”, “push”, and “all out” paces.

As I followed the instructor’s directions, I found myself obsessively looking upwards to the screen displaying our heart rates and their corresponding colors. The goal is to get yourself in the orange zone which is 84% or higher or your maximum heart rate. Ideally, you should have clocked 12-20 minutes in the orange zone by the time class is over. I felt a bit like I was in my own video game, and got such a rush from seeing my box on the screen switch to the coveted orange hue.

After the treadmill workout, we swapped with the other group and hit the rowing machines. I thought that I had effectively rowed before, but apparently that was false. Once the instructor gave us goals for distance and strokes per minute, it became evident I had never really rowed before. But, the good news is that it wasn’t long before I was back in the orange zone.

Intervals on the rowing machines were interspersed with strength training on the floor. We were given a strength training circuit to complete that involved dumbbells, straps, and bosu balls. They have a lot of different types of equipment, so the instructors have plenty of flexibility to keep the circuits new and interesting. The exercises are also posted on another screen on the wall, so you if you missed any of the instructor’s demonstration, you won’t be lost.

Before I knew it, it was time to cool down & stretch. At the end of class, everyone’s final stats appear on the screens showing total calories burned, in addition to minutes spent in each “zone”. Through the sweat dripping down my face, I was pretty proud to see my 14 minutes of orange zoning. Nailed it.

After class, Julie (the instructor) stuck around to answer questions and help people make sense of their stats. By the time I made it home, I already had an email with my “performance summary”, which I pretty much used to immediately justify a massive recovery breakfast.

Nerd alert: I can’t believe I haven’t focussed on stats in my workouts before. I totally get why Orangetheory is so addicting; there’s something very gratifying about seeing your hard work backed up with some good ol’ fashioned data. Plus, I definitely felt it the next day – the best kind of pain.