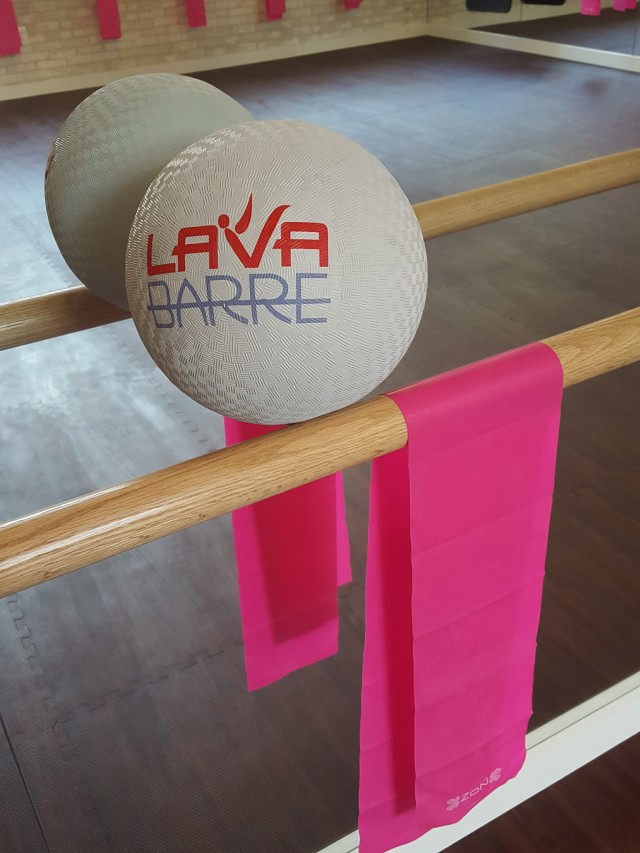 Crash Course: Lava Barre just reopened in a new, larger location in the Rosslyn neighborhood of Arlington, Virginia. Besides the increased space, the new studio has also expanded its fitness offerings with the addition of cycling, yoga, and TRX classes. Of course, their signature barre class is still a popular item on their diverse fitness menu.

class: all of them

cost: new client drop-in is $20; there are also a variety of packages available

Lava Barre first opened its doors in July 2012 in Clarendon and quickly gained a devoted following of barre enthusiasts. Something about those shakes and quakes keep customers coming back!

After a few years of successfully tucking and burning their hearts out in the petite Clarendon studio (full review), co-owners Lauren Price and Vanessa Ligorria decided to expand their business to a more spacious location in Rosslyn’s brand new Slate building. While construction was underway at the new Rosslyn studio, Lava Barre devotees were still able to get their fix with regular community classes at Lululemon and pop-up outdoor classes in Rosslyn’s Gateway Park.

I had the pleasure of joining Lava Barre for their Grand Opening celebration which included the opportunity to “sample” all of their classes in 20-minute mini sessions. I wish this was an option all the time – it was so fun to get a barre, cycling, and TRX workout all within an hour!

The perks didn’t end there. Post-workout treats included South Block Juice samples, “cuppies” from Pie Sisters and appetizers from nearby Bistro 360. Plus, local salon Smitten had set up a “braid bar” for attendees to adorably tame their post-workout tresses.

I had taken Lava Barre’s barre classes in the past, so I had a pretty good idea of what to expect. If you’ve been to more than a couple of barre studios, you know how different the styles can be from each other.

I would say that Lava Barre’s classes are bit more athletic than most, which I happen to prefer. The music was great, instructor was motivating, and I managed to get those coveted “barre shakes” even in the condensed class time.

After barre, I moved on to the TRX class – which was intimidating. I have only taken one TRX class and it wasn’t my favorite mainly because it highlighted my main areas of weakness: balance and strength.

This class was much more fun, though every bit as intense. It’s definitely a great core workout and a good alternative, or complement, to barre class.

My last stop was the cycling studio, which I was especially excited to try. I was thrilled to see Stephanie, one of my long lost favorite instructors from Revolve, on a bike (and on the schedule!). She did not, unfortunately, teach the class I attended but I’ll certainly be signing up for her classes in the future!

The mini class I took was good – they incorporated arms into the cycling workout, which ups the intensity and really maximizes the burn. And because no party is complete without some live entertainment, were also accompanied by a bongo player, which was a very cool and unique experience. Again, wish that was the norm!

The only negative was the the instructor was very loud, and the music was not. So, I can’t say much about the playlist since I couldn’t hear it very well over the instructor + the bongos. When I went back for a full class, I had the opposite experience – super loud music, hard time hearing the instructor. Hopefully they figure out the right balance soon!

There are also beautiful men’s and women’s locker rooms complete with toiletries, showers, and lockers. The showers are outfitted with customized Red Flower products which I have been obsessed with since trying at the Salamander Resort Spa. I will definitely be taking more locker room showers to take advantage of this lovely little amenity.

I love that the new Lava Barre offers a one-stop shop for all my favorite types of fitness classes. Of course, I just moved after living in Rosslyn for 6+ years, but I’ll still try to get there as often as I can.