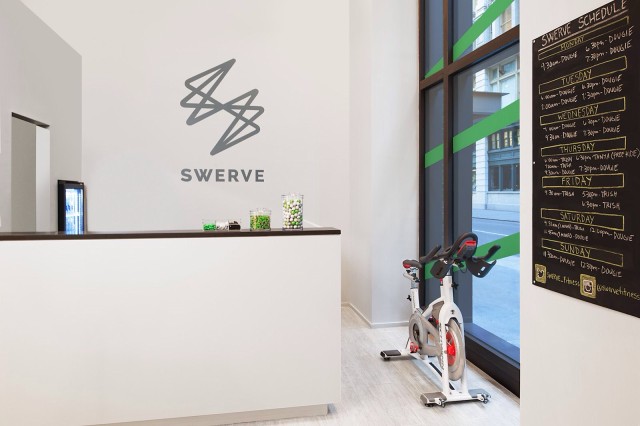 Crash Course: SWERVE Fitness is where the sweatiest of indoor cycling meets the motivation of team competition. Each class is divided into three teams who face-off throughout the workout to compete in sprints, climbs, and drills. There’s no slacking off or pretending to turn that resistance dial in this class. Expect a weighted arm sequence and on-the-bike movements. Each rider will be held accountable – bring your best effort and help your team take the podium.

I guess you could call me a spin studio connoisseur. I’ve worked out at a grand total of fourteen different spin studios all across the country, and it never ceases to amaze me what unique and bizarre things these businesses do to differentiate themselves. I’m not talking about the bikes, the instructors, or the upbeat playlists—those tend to be universal. Think along the lines of S&M décor, smoothie bars, stadium-style seating, classes that show movies while you sweat, and computers that email you your calorie burn and power score after each session. 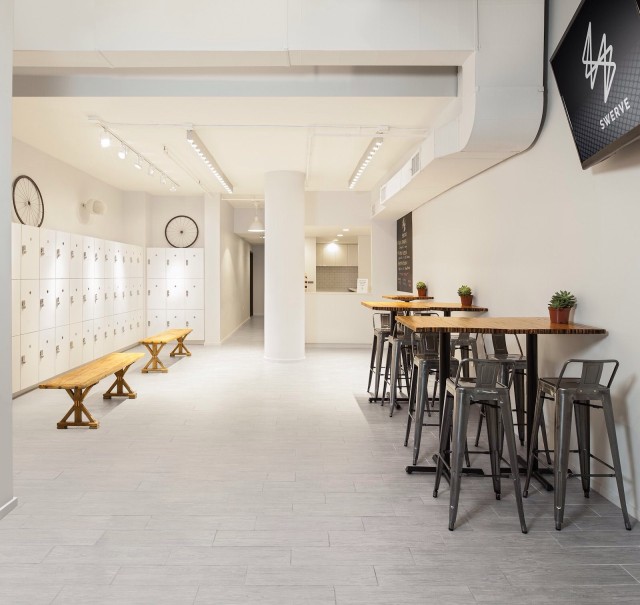 I swear, I thought I had seen it all—until my workout with SWERVE Fitness in New York City last week, where I tested out the world’s first team-inspired spinning experience.

When I arrived, I checked in at the front desk and found out I’d been assigned to bike number 17 on Team Green. Spin shoes in hand, I descended two flights of stairs to the dark studio. With the dim lighting and mirrored walls, the rows of bikes seemed to extend left and right into infinity. I found my way through the metal maze to my sweat chariot for the evening, trusty seat 17.

Clipping in, I still wasn’t sure what SWERVE was all about. I was on Team Green, but other than a green sticker on my bike, I didn’t see what the fuss was all about… and then we whirled our way out of the warm up and into the first sprint of the evening. The two flat screen televisions flickered to life with a bar chart measuring the progress of Teams Red, Blue, and Green. The instructor urged our feet to spin a little faster, our legs to push through a little more resistance, as each team inched forward on the screen. At the end of our sprint, a blue light glowed in the room to signal that Team Blue had won that round.

Suddenly, something inside me felt the indignity of losing. What was once a solitary experience where nobody could tell whether your resistance dial was at zero or 100 was now a very public game of king of the mountain. And the competitive fitness nut in me wanted to play. Go, fight, win.

The next race was straight uphill for what seemed like eternity. The music blared and the bikes whirled louder and louder. I cranked like hell, poised to deliver the gold for Team Green. “It’s not just you on that bike. You’re part of a team now,” the instructor shouted with encouragement. “Time to turn it up and lead by example.” I found myself working harder than I had ever worked in a spin class. My teammates were counting on me—or, at least, that’s the idea…