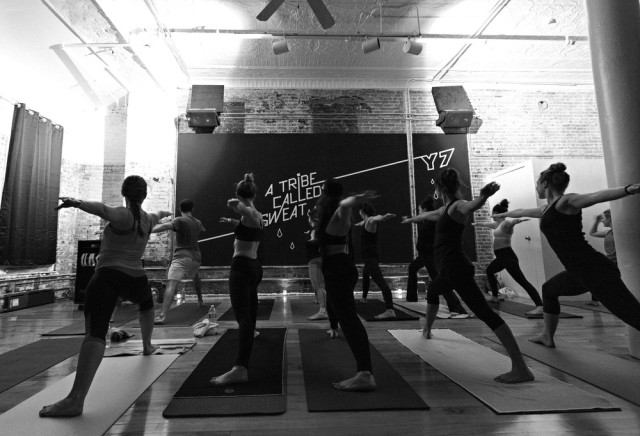 Crash Course: Y7 Studio fuses beat-driven music with candlelit hot yoga to deliver one very unique sweaty experience. The Brooklyn-based brand now has three studio locations with one opening in Flatiron in early April. This is a review of the Soho studio, located in the same building as The Monster Cycle.

[/left][right]wear: yoga clothes to sweat in

Studio Y7 puts you in a dark, candle-lit, heated room with a beat-heavy soundtrack and takes you on an hour-long yoga experience. There’s really no other way to describe it.

But let me try. I’ll start at the beginning.

Studio Y7 started in Brooklyn in 2013 and recently opened a second space in the graffiti and leather-laden Monster Cycle studio in Soho. They will also be opening a third location in Flatiron this week.

When you walk in, make sure to find the line for the yoga studio. Both Monster and Y7 have completely different check-in systems at the same front desk, so it can be a bit confusing. The yoga studio is located on the main floor toward the back, where you’ll find cubbies for your shoes before entering the room. Downstairs is where the monsters go to spin, and where you’ll also go if you need a restroom or shower.

The yoga studio itself is totally dark save for the flicker of a few candles positioned around the edge of the room. Below is an old photo of the space before Y7 moved in, but it gives you an idea of the industrial, lofty vibe you’ll encounter. There are cubbies along the wall when you first walk in where you can stash your coat and personal belongings. If you rented a mat or towel, those will be in the room waiting for you. It’s dark, so there’s a bit of fumbling around, but I just considered that part of the warm up.

I laid out my yoga towel in preparation for the coming sweat fest and took a minute to look around the room. You had your sports bra and spandex yogi types, your dudes in running shorts types, and the sorority muscle shirt and cotton shorts types. A solid mix of fitness stereotypes coming together to experience the newest, chillest yoga kid of the block. The room was packed but not in a claustrophobic way, and the lights were dim enough that it took intense concentration to really notice anyone further than the mat beside you.

The room was heated precisely to warmish. I actually didn’t realize the room was heated at all until 15 minutes into the first sequence, when I had to pause and mop myself off. Fit crasher tip: bring a towel or two and an extra set of dry clothes. You will be sweating.

The instructor began by walking us through what the next hour would bring. “I will guide you through three separate yoga sequences. We will do each together a handful of times, and after each round you will have the chance to practice on your own, however you wish to move.”

I have never been to a yoga class before that turned the students loose to practice however they wish. Granted, we would be learning sequences that we could mimic, but the thought of not having a teachers voice guiding us through was a bit daunting. Scary even. I liked it.

It all ended up working out better than expected. The sequences were intuitive and we did them together enough times that by the time we made it to the freestyle portion, I felt my body go on thoughtful autopilot while my mind got to grapple with equal parts “holy crap am I doing this right!?” and “this is SO cool, I’m totally doing this on my own!” I added in poses I felt I needed, stayed longer in the ones that felt the best, and took out some that I just really didn’t enjoy doing (looking at you reverse warrior). It was liberating and awesome.

The one aspect of this dark, sweaty, freestyle experience I am neglecting to tell you about is almost the most essential: the music. It moved from loud, beat-heavy hip hop to the soulful groan of classical cello to alternative rock. I remember during the first freestyle portion, I was doing a front lunge to airplane just as expletives ricocheted out of the speakers and around the candlelit room. Interesting.  But oddly, it worked.

The experience in a nutshell was a very sweaty, challenging, and fun one. It is not, however, for yoga beginners – as I think I would be so very lost trying to remember poses and follow only the verbal cues. If you’re new to yoga or want a more guided practice, check out their Slow Burn sessions. But if you’re comfortable in your practice and want to flow hard with the chillest studio in town, I definitely recommend getting bendy at Y7’s vinyasa class. Let me know what you think!