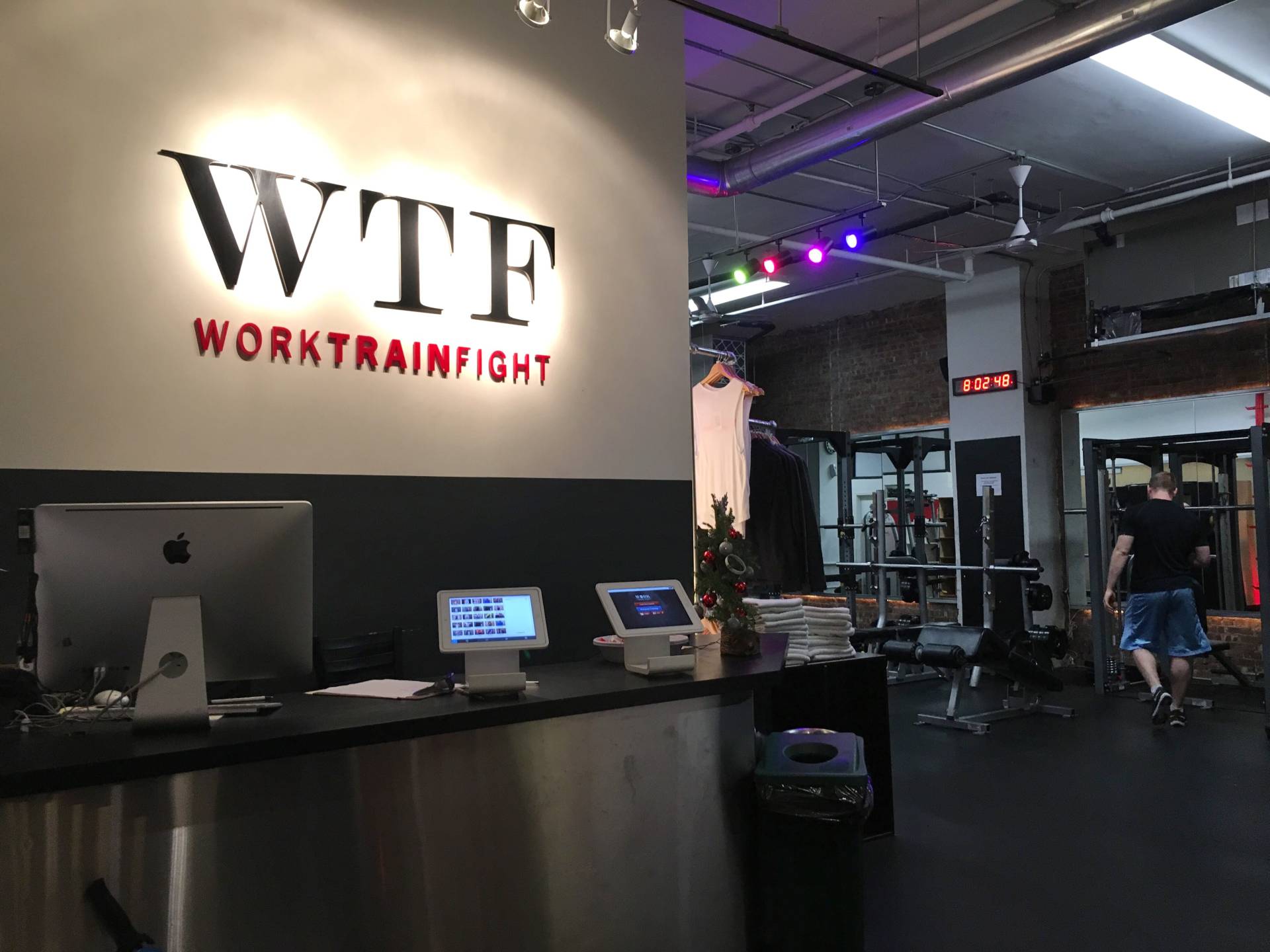 Crash Course: WORK Train Fight (WTF) is a boxing studio claiming to deliver “real boxing and real fitness for everyone.” While this sounds pretty generic, if you live here in NYC, you know that there are plenty of studios that are more boutique and less boxing; more exclusive and less everyone. WTF offers a number of different options for Manhattanites looking to get into fighting shape, with private, semiprivate, and group classes ranging from boxing conditioning (no contact) to boxing technique (contact).

wear: loose clothing you can sweat in

bring: water bottle, hand wraps if you have them

cost: $95 for a package of 5 private sessions, group classes available on FitReserve and Classpass

“Meaghan, my friend’s son is a boxing instructor in the city. You just have to check out his class.”

Listen guys, when The Original Fit Crasher tells you to crash a class…you crash the class. That’s just how this works. I’d check out underwater rhythmic gymnastics if so summoned.

And so, I reached out to Luke, a recent transplant from my home town of Cincinnati and son of my mom’s friend. He is a personal trainer and boxing coach, and moved out here to NYC to shift his fitness career into high gear. Since boxing is the new spinning is the new hot yoga…something tells me Luke made a very good decision. If there’s one thing New Yorkers love more than dark, monochromatic clothing – it’s fitness trends. And boxing is currently it.

I showed up to WORK Train Fight on a Friday evening, not knowing much about the studio or what the next hour had in store for me.

The studio itself is zero frills. That doesn’t mean it’s dark or dingy – the opposite, actually. I found it to be clean, bright, and inviting. But don’t come here expecting scented cool towels, aromatherapy shower products, or flashy lights. This place is set up to do one of three things: work hard, train hard, or fight hard.

I threw my gym bag in a locker, grabbed some gloves, and headed out to the floor to meet Luke. He took a few moments to go over my fitness goals, injuries, and ask if there was anything I’d like to focus on during our one-on-one session. We could spend all of our time in the weight room, all of our time boxing, or do a little of both.

I told him that, in a past life, I had spent a little over a year fully dedicated to Krav Maga training. That meant being in the studio multiple times week kicking, punching, and fighting like hell through class after class. I had bruises everywhere. My knuckles were perpetually torn. And I loved every single minute of it.

While that was a long time ago, I was amped to be back in a true blue boxing studio where people weren’t afraid to hit or train hard. So I opted to spend 90% of our time together working on the bags. The weight room, I decided, could wait for another day.

We began with a dynamic warm up to make sure my body was ready for the workout ahead. I asked Luke about Cincinnati and why he came to NYC, and he did the same. There was some nervous laughter on my part as I realized that everyone around me was grunting, sweating, and generally killing it. This wasn’t going to be a light workout. No. I was in for a real-deal sweat fest.

Luke then explained that he teaches boxing technique and the various punches on a number system. So instead of yelling out “jab”, “cross”, or “hook” he would yell out “one”, “two” or “three.” I loved this system. Especially for someone just learning or getting back into boxing after a long hiatus, the numbers were so much easier for my brain to remember in real-time over the technical terms. I found that I was able to react so much quicker. Which means, I was able to get more punches in and really maximize my time.

We practiced straight punches, and then moved on to a few combos. I was completely gassed after just a few minutes. How is it that I can run a few miles or go through an entire spin class, but feel like I’m going to pass out after five minutes of fighting?

Instead of being frustrated with how tired I was so early into the session, I used it as motivation. I obviously had a lot of work to do. Boxing, it seems, was showing me a gaping hole in my overall fitness. And I was (and still am) determined to do something about it. 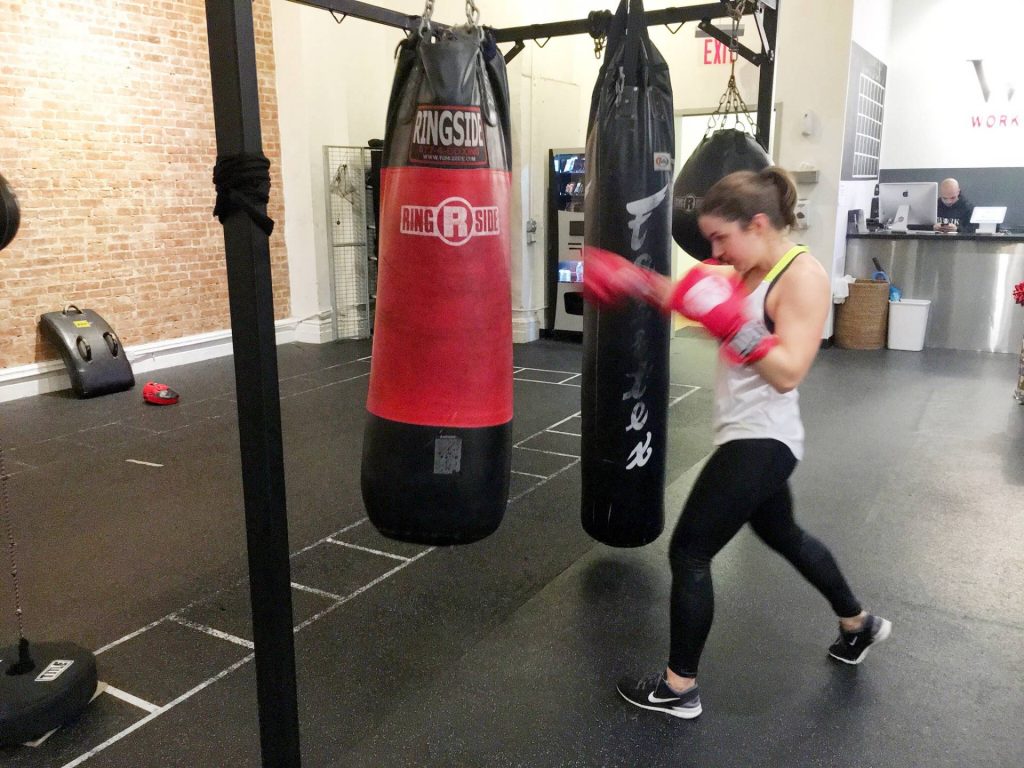 After a brief break to catch my breath and shoo away the stars circling around my eyes, we worked on high and low kicks. I tend to have a stronger lower body, but again, I was out of breath within a few seconds.

Then it was on to some technical maneuvering –  learning how to duck and roll away from punches in a fight. Seems important, right? Luke pulled out foam pool noodles, used in lieu of actual punches, under which I was supposed to dodge, sway, and generally get the heck out of the way. Talk about a total fail. I wish I had a video of this, because I was literally being taken down by pool noodles. I was so tired at this point that I couldn’t focus on getting out of the way, and instead had foam raining down on me from left and right. Giggle fits ensued. We need to stop before I completely lose it, I argued. You need to focus and get back to work, Luke suggested.

After a final “burn out” set of punches and kicks, we went over to the gym area to finish up the workout with an ab series.

By this point in the workout, I was a total mess. I had quite literally sweated through everything I was wearing. I was hardly able to lift my arms to take off my gloves. And oddly enough, I was having the best time.

Luke toasted my core with a few targeted exercises I had never done before. I thought planks and crunches were about as exciting as core work got these days. Boy, was I wrong. Like the work we did on the bags, Luke spared no detail when making sure I got the biggest bang for our time together. I think at one point, when trying to balance a ball between opposing limbs, I even let out a “you’ve got to be kidding me with this. How is this move even possible?”

I can’t wait to return and get back in the ring. I have a lot of work, training, and fighting to do!

Tip: If you want to book a workout with Luke, shoot him an email ([email protected]) and let him know the Fit Crasher sent you!