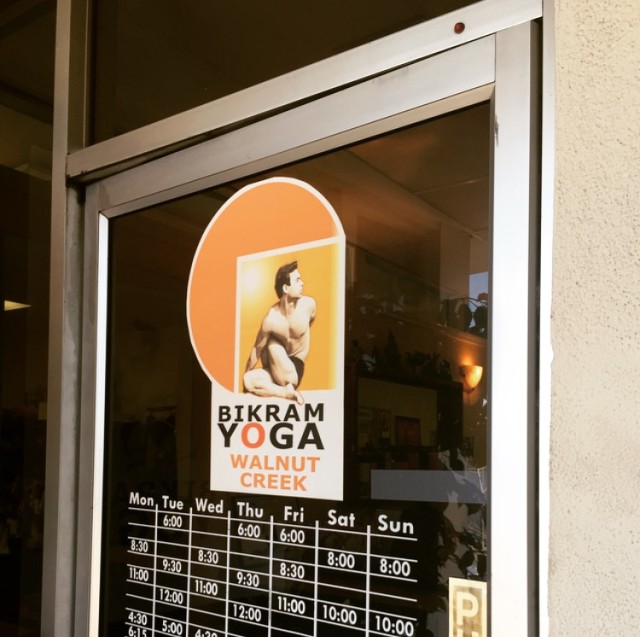 Crash Course: Bikram Yoga Walnut Creek is raw, real, and traditional. It exists for people who show up to yoga to deepen their practices. However, it is also a very challenging workout for ANYONE, and you don’t have to be a seasoned yogi to get all the benefits of a class. Bikram classes are held in a room heated to a humid 105 degrees, so be sure to hydrate before class and come prepared to sweat.

Downtown Walnut Creek, California set the stage for my formative years. It’s where I asked my mom to drop me off on the weekends to go shopping with my friends (always returning with a sickeningly-sweet smelling spritz from Bath & Bodyworks), went out to dinner before Junior Prom, and eventually, took my first Bikram yoga class.

Years later, I am back in town to visit my parents, and decided to return for a proper fit-crash and a much needed sweat (does anyone else drink more wine with their parents than they do normally? It’s just so . . . free).

Bikram Yoga Walnut Creek (“BYWC” in this review) is not Corepower, Down Dog, or any other modern luxury studio catering to Lululemon-clad young women who do yoga one day and spin the next (*raises hand*). This place is raw, real, and traditional. It exists for people who show up to yoga to deepen their practices. However, it is also a very challenging workout for ANYONE, and you don’t have to be a seasoned yogi to get all the benefits of a class.

One of the reasons I wanted to write this review is because I am totally guilty of seeing a tacky sign in front of a yoga or other boutique studio, and assuming that if the marketing is subpar, the workout will be too. After all, I don’t have an hour to sit around with strangers and not break a sweat. But sometimes that instinct is wrong, and such is the case with BYWC. Yes, it’s vintage and no the studio space isn’t glamorous (though it’s perfectly comfortable and has plenty of space to change, shower, use the restroom, and even do a little shopping).

But BYWC is real Bikram, and it is really hard.

As you may know, Bikram yoga is 90 minutes in a room heated to 105 degrees. So it’s hot. I grew up Catholic, so it was important to me to get there early enough to find a spot in the very hottest part of the room to ensure maximum penitence for my sins (as noted earlier, wine).

My best friend Blanca joined me for class, and before beginning we spent some time chatting with our incredibly friendly instructor, Kristel. If Kristel is any indication, those new to Bikram should feel very free to come to BYWC with questions or concerns, knowing that they will be answered before class begins. Unfortunately, even though it was Blanca’s first time and I would be writing a review, the studio manager, Virginia, had both of us pay the normal drop-in fee of $20. In fact, this was even after Kristel offered a free class. No matter, I’m always happy to pay for a good workout, but I do think customer service is important for boutique owners, which is why I mention it here.

That’s not to say we didn’t get our twenty dollars’ worth. The first half of class consists of standing postures, and the second half (though it feels suspiciously shorter) consists of sitting or lying postures. At times during both halves I took little breaks to grab a drink or simply refocus my eyes after seeing stars. Completely normal! Kristel reminded us that staying in the room is the most important accomplishment in a Bikram class. The hardest postures, in my opinion, were camel and triangle. Anyone can do them, but doing them correctly, deeply, or staying the whole time can be very challenging.

By the time 75 or so minutes had gone by, my body craved rest, and continuing with postures and then moving into regimented stretching felt hard, but good. Good in the way that reminds you why you go to expensive boutique classes instead of always working out at a gym or in your living room: sometimes you just can’t push yourself the same way someone else can. I know that if I had been doing this yoga workout on DVD, I would have pressed stop right around here.

But I was unable to stop class with my mental remote, I pushed through the fatigue, and 90 minutes later Blanca and I emerged with shirts one shade darker (read: completely soaked) than we walked in with. Cool air felt more luxurious than a bathtub full of diamonds. It was a very sweaty class, and we were ready to start talking about how to replenish our detoxified bodies (I ended up making a delicious massaged kale and date salad that my little brother looked at and said, “I hate kale. And dates.” Cool.)