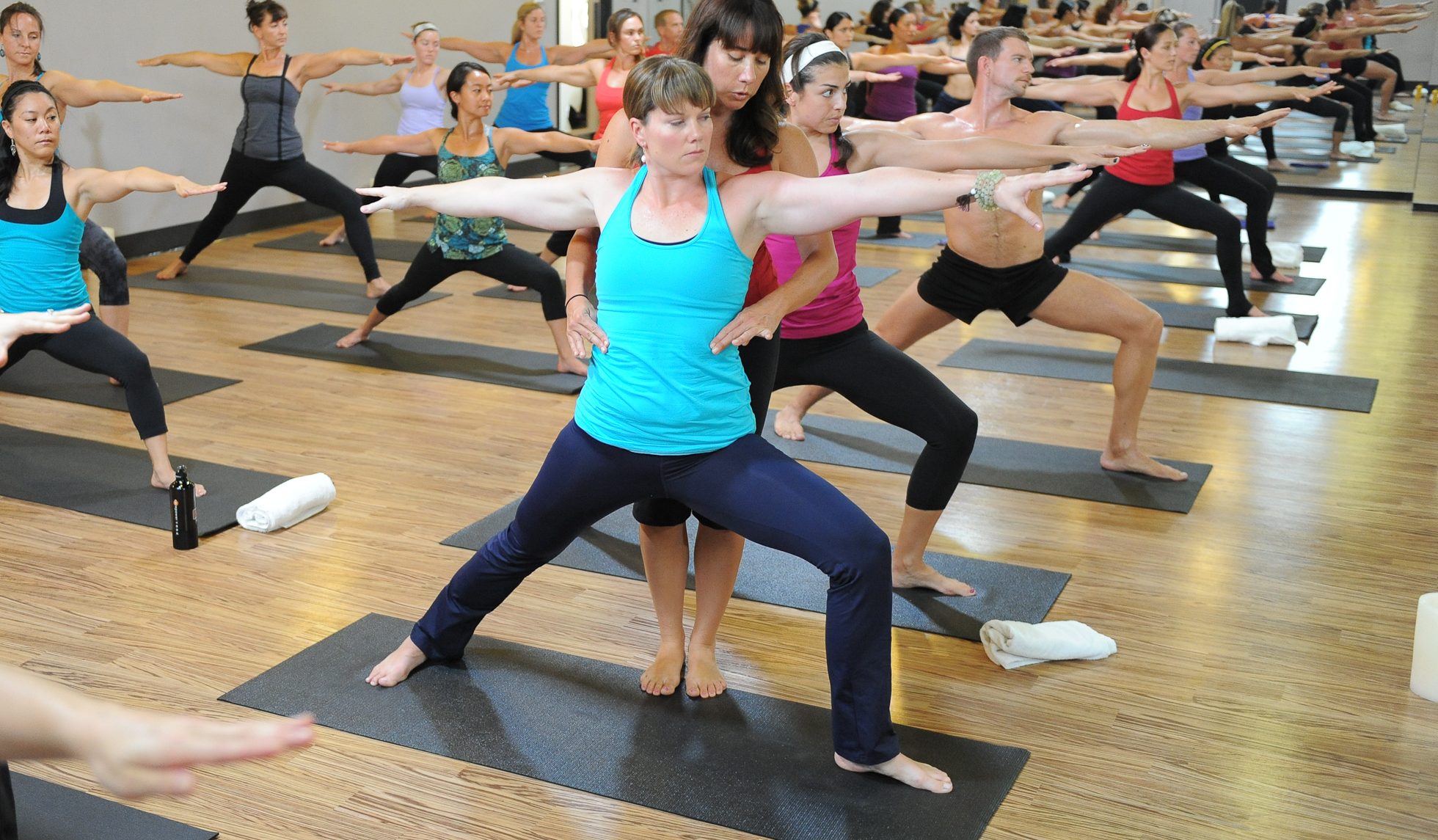 Crash Course: Hot Power Fusion at CorePower Yoga combines the elements of hot yoga and power yoga into a 60-minute mix of meditation and strength training. Set in a heated environment, be prepared to sweat it out. Oh, and it wouldn’t be a CorePower class without some ab work! Ever done eagle pose crunches before? Here’s your chance! Check out the CorePower Yoga Georgetown website for a full schedule of classes.

Hey there Fit Crashers! I’m Maggie and I’m thrilled to be joining The Fit Crasher to bring you the good, the bad, and most importantly, the sweaty on the DC fitness scene. First up: CorePower Yoga in Georgetown.

CorePower has an ever-expanding presence in the DC area with studios in Georgetown, Glover Park, and Bethesda. I opted for the late-night Hot Power Fusion Candlelight class with Anna in Georgetown.

The Georgetown studio is located right off M Street, tucked away in the Foundry Building on Thomas Jefferson St. If you’re like me and you know locations better by landmarks, you’ll know exactly what I’m talking about when I tell you it is conveniently located across the street from one of DC’s best kept secrets: Baked and Wired. I mayhave popped in for a quick coffee and snack…

Situated on the first floor of the Foundry Building, you can catch a glimpse of class in action as you walk in. CorePower offers a complimentary free week for new students. Crasher Tip: Make sure to keep an eye on your inbox if you go for your first week of free classes. I was pleasantly surprised to receive an email about a second free week shortly after trying out some classes during my free period! If that alone doesn’t win you over, the beautifully designed lounge and locker rooms will.

Full Disclosure: I had been to the studio before this crash and couldn’t get over how nice it was. Think: immaculate, well-stocked, and welcoming. There was a full line-up of classes on Tuesday night and since I was attending the last class of the day, I wasn’t too surprised to find that things were a bit busy and hectic. That said, even during class rush hour, you could easily snag a quick shower and find space in the locker room to store your belongings.

There are two yoga studios at the Georgetown location — both with large windows and hardwood floors. Studio B was transformed into a candlelit sanctuary for Hot Power Fusion. The photos really don’t do it justice, but imagine a calming warm room full of twinkling lights.

For a late-night class, I was pleasantly surprised with the class attendance. Just enough people to not feel awkward and isolated, but not too overcrowded where you’re constantly worried about knocking into your neighbor. Or in the case of this class, dripping sweat all over their space.

Did I mention that this class is heated? Trust me when I say you’ll want to have a towel handy. Or two.

It is also probably worth mentioning that I am by no means an experienced yogi. My favorite type of yoga class is one where Mumford and Sons is blasting over the stereo system and it’s not uncommon to break down into burpees mid-class (kind of like their CorePower Sculpt class). That said, this class was a nice balance of challenging and calming.

Anna walked us through all the transitions and offered hands-on adjustments throughout the class. I felt at ease even though some of the poses were unfamiliar to me. Anna’s frequent reminders to drink plenty of water were also much appreciated.

And it wouldn’t be a CorePower class without a portion dedicated to strengthening the core. We did a short ab set that included variations of crunches and planks.

We ended the class the way we started — with a quick reflection on the idea of “santosha,” a Sanskrit word meaning contentment and happiness. Anna shared with us a quote that went something like:

“We can either make ourselves happy or miserable. The amount of work is the same.”

We left class to encounter an unexpected evening thunderstorm. While some might grumble about the bad luck, in the spirit of santosha, I chose to be happy.