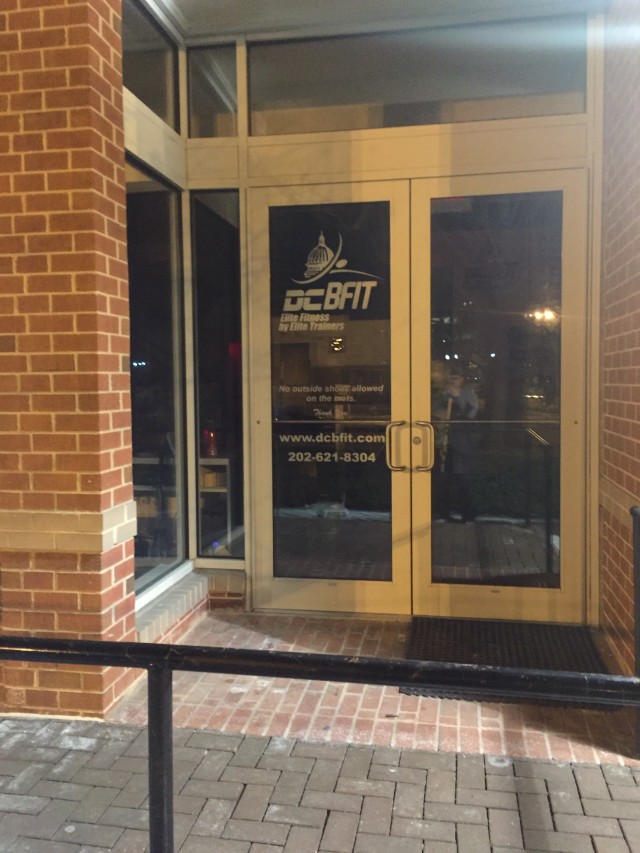 Crash Course: Train like Jean-Claude Van Damme. The DCBHIIT class at DC Boxing and Fitness is a 45-minute high intensity, interval training class. There are plenty of punches, kicks, pushups, plyometrics, squats…you’ll probably do some form of every exercise you can think of.

[/left][right]wear: definitely wear clothing that has a lot of mobility

NOTE: With a few exceptions, I will be wearing a heart rate monitor to gauge the intensity of the class I am reviewing and see how many calories I burn. Little shoutout to David Magida at Elevate Interval Fitness who turned me on to using a heart rate monitor. It has definitely added an edge to my workout by preventing me from taking too many breaks.

Chris Tyre, the trainer for the DCBHIIT class, isn’t the biggest guy in the room. However, looks can be deceiving, and I would hate to be in the shoes of the guy who made that mistake.

Chris is on the US Marine Corps Kickboxing Team, a group of individuals who likely eat nails, wrestle lions, and outrun cars. He is the two-time Light-Welterweight National Champion in the IKF under Muay Thai rules. It’s rare that you actually meet a trainer with real world experience such as a professional ass-kicker, and I would encourage everyone to take advantage. 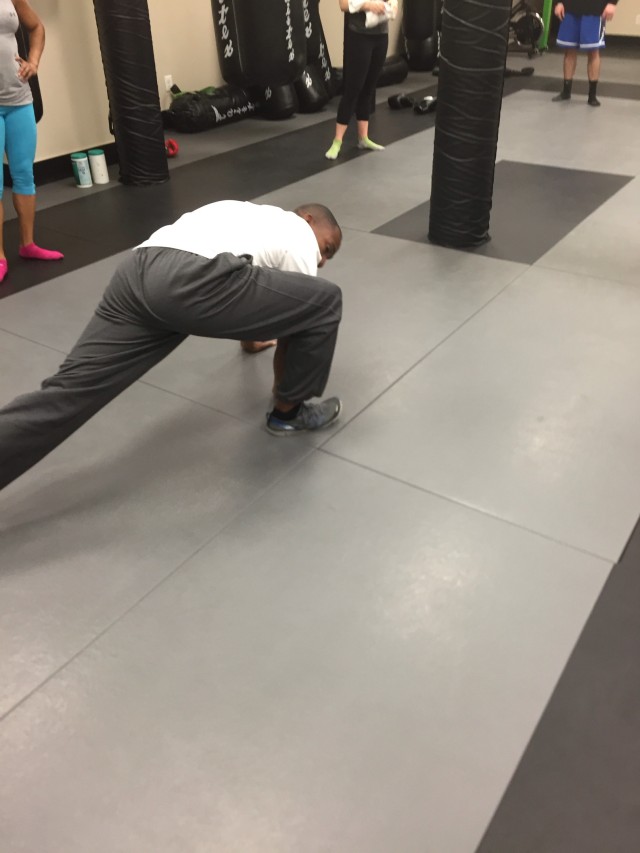 The gym is relatively small but has everything that you need (changing rooms, lockers, etc.) and has a great deal of equipment despite its size. DCBFIT also offers an open gym session following its class schedule.

The gym recently reopened under new management. The Fit Crasher provided a review of a cardio boxing class at DCBFIT in 2013 and wanted to come back for an update.

It’s very clear that DC has a great fitness scene. The old adage that everything in DC is substandard to New York is becoming less and less of a reality. I have consistently underestimated the difficulty and intensity of these classes. Unfortunately, I wanted to make sure that I completed the necessary cardio and ran 3.5 miles from my apartment to DC Boxing and Fitness prior to the DCBHIIT class.

The DCBHIIT class is a true HIIT class. A lot of gyms like to say that they offer a HIIT class, because there is a lot of popularity around that term like omegas in eggs or gluten free cookies (the number of omega 3s in eggs is negligible compared to what you actually need and gluten free cookies may not have gluten but do have tons of other junk that does you no favors). I am ashamed to say I have taken classes named “UXF”, “Body Pump” and “Abs Blaster”… no thank you Washington Sports Club.

High-intensity aerobic interval training (HIIT) is a popular strategy for improving cardio- respiratory fitness and health, as well as reducing body fat levels. A standard HIIT protocol involves alternating bouts of both high- and low-intensity exercise to increase the amount of high-intensity work performed during an acute bout of training. High- intensity intervals are typically performed above the lactate threshold, close to V_ O2max, and then carried out to a point just before the onset of volitional fatigue. This high-intensity bout is then followed by a low-intensity recovery period that allows the body to buffer and clear lactic acid from the blood, thereby allowing the individual enough time to recover and perform another high-intensity interval.

What all of that means is that you generally go really, really hard for a 20 to 60 seconds and then take a breather, usually 10 to 20 seconds, while doing a less intense exercise. That rest period, albeit a short rest period, is designed to give you just enough rest to go again and again.

As terrible as that sounds, the DCBHIIT class did an excellent job of making 45 minutes go a little bit quicker by offering a series of circuits that allow you to train like Jean-Claude Van Damme (Bloodsport, Kickboxer, not Street Fighter… 80s kids, you know what I am talking about).

The size of your body plays a factor here. My fitness focus has primarily centered around power lifting, which does not help you during this workout. In fact, as Chris noted, it’s important to have those fast twitch “baby” muscles. Less weight makes you faster, and I am reminded of every movie I have ever seen where the little, fast guy takes down the angry, overly confident big guy, usually with just a few well placed kicks or punches.

The circuits involved two parts, one high intensity part followed by a low intensity part, consisting of a bodyweight exercise such as squats, pushups, and planks. The high intensity piece of the workout involved punches, kicks, combinations of either or both which was interesting. The combinations definitely threw me for a bit. Did I just throw the wrong punch, or was I supposed to kick when I punched?

I found that the complexity of the combinations required greater focus which seemed to make the seconds go by faster, perhaps at the expense of the intensity of the workout. Because I had to think about the combination, and make sure I did it correctly, it did subtract from my ability to go as hard as I could have.

However, I think that that’s the point. With more experience and training, the routines and combos become second hand, making them easier to execute and providing a more beneficial workout.

My favorite part of the workout had to be the round house kicks and knees. We all remember that iconic scene in Kickboxer when “Kurt Sloane” trained to be a Muay Thai Kickboxer in the hopes of avenging his brother. His trainer, an older but wiser flute player/Muay Thai expert (I am not kidding) made him kick a tree till it broke. There were no palm trees at DC Boxing and Fitness, but we did get to kick a few heavy bags.

Even more fun were the knees…grab the top of the bag and slam your knee into the middle part. I’m not going to lie, it felt good to fight dirty. JCVD incarnate. Cue the flaming swords, mystical training grounds and rando eagles flying over head (again, not kidding, I love the 80s).

My one criticism of the DCBHIIT class is the lack of instruction. For the most part, many of the exercises were not difficult or unusual. However, the kicks, punches and combinations of the two were something that I was not accustomed to and I may have benefited from a little instruction. Chris did tell me that after your first class, DCBFIT will schedule a one-on-one training session to help you through some of the mechanics. After all, like Jean-Claude Van Damme, just because it’s on TV doesn’t necessarily make it reality.