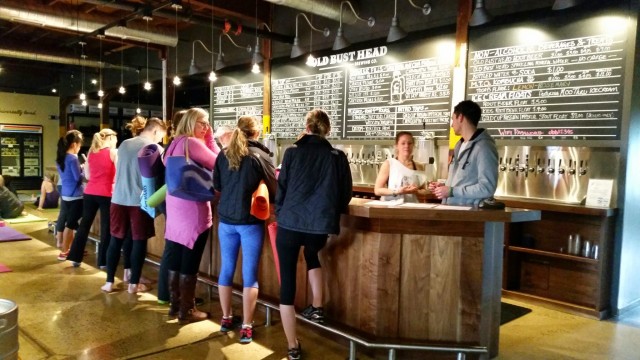 Crash Course: In recent years, a bunch of breweries have cropped up in the DC area as a result of the ever-growing craft beer movement. They offer a nice alternative to a traditional bar, and the opportunity to expand your beer palate by sampling local, inventive beers. As more and more breweries have opened, competition is getting stiffer and many are looking to add some non-alcoholic offerings to entice visitors. Old Bust Head Brewery opened their taproom in August 2014, and started their monthly Detox/Retox Yoga classes in September 2014. A few weeks ago, I lured a bunch of friends out to Warrenton with the promise of immediate post-workout beers.

bring: water bottle, mat if you have one

I am always trying to recruit my husband to join me on my fitness escapades, and most of those attempts are completely unsuccessful. When I read about a yoga class being offered in a brewery, it seemed like a win-win. Sure enough, I got not only him on board, but several of our friends – no small feat for a Sunday morning nearly an hour outside of DC.

Old Bust Head is out in Fauquier County, Virginia, about 45 minutes from DC. There’s lots of hiking, vineyards, and good food nearby so it’s a perfect area to explore for a day trip.

Detox/Retox Yoga kicks off at 10 am one Sunday a month. Without the promise of a mimosa, there isn’t much that can get me moving on a Sunday morning. So, I was surprised by the impressive crowd that had already assembled at the brewery when we arrived. They had over 100 thirsty yogis situated around the taproom, representing all different ages and fitness levels.

Detox/Retox Yoga is billed as “social yoga” which was perfect for our chatty and giggly group. It was definitely a far cry from a serious yoga studio experience, but the venue should tip you off to that.

Nevertheless, I did break a sweat during the 75-minute “flow yoga” style class. In spite of the massive class size, Jaimis still managed to give participants personal attention as she walked around the room, making adjustments/corrections as needed. Based on the results of the “optional headstand” move, I came to the conclusion that the class truly represented all levels of experience. In our group alone, we had a mix of newbies and experienced yogis. Also of note – this was the most men I’ve ever seen in a yoga class (hmm wonder why?).

After the closing “namaste”, we made a beeline for the bar. Old Bust Head has a wide variety of beers on tap, as well as MTO Kombucha (so good!). Once class is over, the brewery staff begins setting up the taproom for normal business, which makes it easy to snag a table.

The brewery doesn’t officially open to the public until noon, so yogis get a head start before the crowds arrive. Lots of people brought their own picnic lunches and snack foods, but they also have takeout menus on hand from local food vendors.

We enjoyed “rehydrating” for a while at one of their communal picnic tables. I stuck to the kombucha, but the beer got rave reviews from the rest of the crowd. I think it’s safe to say that many enjoyed the “retox” more than the “detox”. They sell six-packs, growlers, and kegs at the brewery if you want to have your own Detox/Retox Yoga session in your living room.

All in all, we really enjoyed our Detox/Retox Yoga experience and will likely be back soon. It’s a great way to spend a Sunday with friends and a perfect introduction to yoga for newbies. More than anything, it’s a really clever use of the space and a creative way to bring in a new audience.