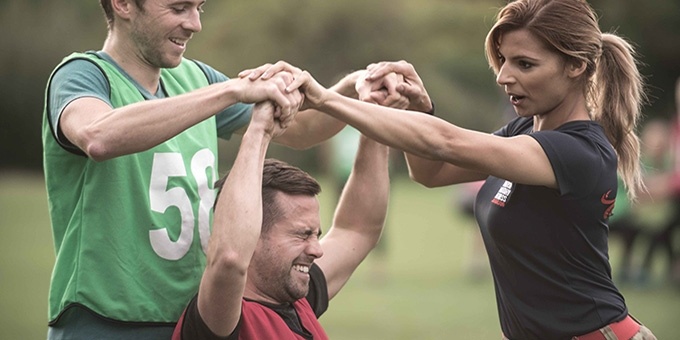 Crash Course: British Military Fitness (BMF) combines elements of military training and physical fitness with the great outdoors of London’s parks and green spaces. It’s an awesome way to experience London, check out its fitness scene, and be all you can be for a day. There are over 30 locations to choose from so there’s bound to be a spot close to wherever you are staying. For more information about locations and class times, check out the British Military Fitness website.

perks: Working out outside provides an awesome view of London and its parks of which there are many. As far as lockers and showers are concerned, you’re on your own.

It’s important to understand a few things about military physical fitness. Yes, it’s designed to get you into shape. But it’s also designed to train you to perform under pressure under some of the worst conditions possible, and in a team. That is how British Military Fitness operates.

All the instructors are former military, and many have served in combat. Vlad is a former Czech Paratrooper who served in Bosnia. Jel served in the 3rd Regiment Royal Horse Artillery in Germany, Canada, Cyprus, and the UK.

The 45-minute workouts operate similarly to high intensity interval training: short bursts followed by an activated rest. As expected, there’s a strong focus on bodyweight and core strength. Situps, squats, and pushups are among a few of exercises we did interspersed with short runs. Most of the exercises are performed with a partner. Face each other, do a plank, one hand on the other’s shoulder, hold for 30 seconds. Abs fail.

The concept of partner workouts is not new. Mark Twight, who founded Gym Jones, trained Henry Cavill for Superman, and works with the Army’s Tier 1 Special Operations assets on physical fitness, said:

Where one guy has to accomplish a particular task all the while his teammate is suffering, the faster he does it, the less his teammate suffers. These types of workouts really cause a person to dig deeper then they would to save themselves, because we will always work harder in the service of someone else.

Where British Military Fitness is unique is in its use of the bibs. Everyone wears either a green, red, or blue bib. Each bib denotes a specific fitness level with red denoting a beginner level, blue the intermediate level, and green the expert level. Workouts are the same but the reps per exercise are different. Therein lies the value.

While everyone of every fitness level can participate in the workout, the bibs allow for everyone to get the same benefit. A lot of class workouts are homogenized to allow people of all fitness levels to participate. With BMF, there’s still that group mentality and encouragement, but having the bibs allows for the participants to be pushed harder. Even with group workouts, you often hear instruction to push yourself as hard as you can. There is a lot more precision in the bib system because the instructors know your fitness level and know when you need to push yourself.

The most difficult part of the workout was the intensity. It was unexpected and there were certainly points where I questioned my self-appointed intermediate blue bib status.