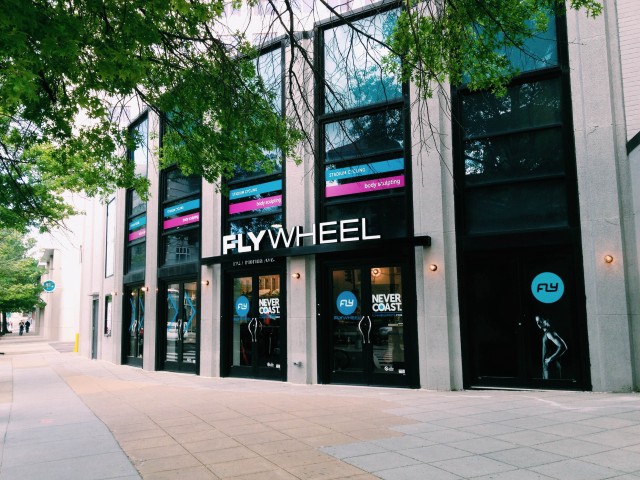 Crash Course: Watch out, SoulCycle! FlyWheel is in town. And they’re not messing around. Born and raised in the big apple, this spin studio brings together a killer combination of choreography and competition to provide a kick-ass 45-minute workout.

perks: all of the amenities you could dream of – spin shoes, water, towels provided for free

Located conveniently in Dupont at 19th and Florida, FlyWheel has made it’s much anticipated landing in DC. The space is home to the company’s signature FlyWheel spin and FlyBarre barre classes. I opted to crash in on their 6am FlyWheel class earlier this week.

Morning workouts used to be my jam. 5am alarm? No problem. But after about a six week hiatus due to running injuries, waking up was a challenge. Thankfully, FlyWheel makes sign-in and set-up a breeze for all the groggy people like me.

FlyWheel hooks it up on amenities. When you sign up for a class online, you also select a bike for your ride. After signing in on one of the iPads at the front desk, there are free shoes set up for you – I found the cube that coordinated to the bike number I had selected, and my free rentals were already laid out. Pretty easy, right?

The studio itself is beautiful. There were plenty of benches and lockers – and it wasn’t too overcrowded even during the morning rush. The lockers can be set with personal codes – so no need to haul around your gym lock.

They also have both a men’s and women’s locker room, complete with showers, hairdryers, dry shampoo, and hair ties of all kind.

They have over 60 bikes in the spin studio – set up stadium style – with big mirrors in the front. Gregg, the instructor, was on hand to help everyone get set up, but they also have an army of support staff who helped with bikes. While the set-up doesn’t offer much in the way of hiding in the back if that’s your preference, they do dim the lights for class.

Now, I’ll be the first to admit that I am no stranger to cult-like fitness groups. But, I had to laugh a little when I looked around the class a realized that everyone was wearing grey or blue – FlyWheel’s color scheme – and there I was in a bright pink neon tank. Looks like I missed the memo on that!

FlyWheel embraces the competitive mentality – each bike is equipped with a “tech-pack” that displays your “torq” (resistance), speed, and power output. The real kicker is the “Torqboard” which is displayed on two huge screens in the front of the room.

Throughout class, you can monitor your progress and follow the leaderboard. At first, I was a little skeptical of this…what if I was dead last?? What happened to the “we’re-all-in-this-together” strugglefest?? But within minutes of class, all of that was forgotten and I was eagerly attempting to chase down everyone else in class. Not to mention a place in the infamous FlyWheel #300club. No joke, it is a thing.